How symbols were used to make outstanding art…

It is about time that we chat about symbols. Beautiful symbols were used to make outstanding art.  I hope this topic will give you more fuel to make beautiful artwork. Today is the first episode of a series on this subject.

For a general understanding, I would like to take a peek into the history of art. Symbols have been used through the ages. It is of the utmost importance to get an idea of their meaning through history. It will not only give you a perspective on today but give you lots of insights. Art history evolved in a kind of natural way through the ages. Where we are and what we do today is a result of what happened in the past.

The subject of art history is far too immense to deal with in-depth. I just sketch a general overview for you to understand the role of symbols in earlier days.

The Purposes of art

Right from the very beginning art was used for religious purposes. I give you an example. The oldest piece of art is the Woman of Willendorf, a small idol made of limestone, found in 1908 in the south of Austria, Europe.

The small statue is believed to be a fertility symbol or a fetish (a manmade object that is believed to have supernatural power over others).  Estimated age: between 28.000 – 25.000 before Christ. Now another example.
We take a big step to the time of biblical Rachel. In the bible story she carries her personal idol when she leaves her father’s house. Art is intrinsically connected to religion or the spiritual realm. It was and is very much expressed through symbols or symbolic objects.

Next step in art history: Egypt

In Egypt (date: 3000 BC – 300 AD) we see the same tendency: art is connected and used for rituals and to depict idols. The doghead is an example of that, being an Egyptian god. Wall paintings were used to depict people in a very special way. They believed that after death the person needed strength and for this reason, they were depicted in their most powerful look. Therefore a mix of ‘points of view’ of a person was taken to depict the deceased in a powerful way.

Egyptian art was done according to this pattern for ages and ages. There were no personal interpretations, their art had to be made through several canons, a set of guides and rules that prescribed how to make their art. It was packed with symbols. The Egyptians have laid the foundation of art and architecture of later times. Symbols used in the Egyptian period: de falcon, the anch-cross, mummies, doghead figures, etc. most of them are attributed to the Egyptian religion.

Egyptian art was done according to this pattern for ages and ages. There were no personal interpretations, their art had to be made through several canons, a set of guides, and rules that prescribed how to make their art. It was packed with symbols. The Egyptians have laid the foundation of art and architecture of later times. Symbols used in the Egyptian period: de falcon, the anch-cross, mummies, doghead figures, etc. most of them are attributed to the Egyptian religion.

The Dorians and Ionians invade Greece and form Greek civilization. You will find some more information here: https://en.wikipedia.org/wiki/Dorians. The Greeks did a lot of trading with the Egyptians and they are believed to be influenced by them. The ideal of the Greeks was beauty, proportions, and order.
This is built on the geometry they saw the Egyptians use and philosophies of Plato and Aristoteles, some of their main philosophers who propagated humanistic concepts. I know I am hugely stepping through Greek art history but for now, it suffices to mention that the Greek artist Polykleitos was the inventor of the characteristic Greek pose called ‘contrapposto’.

Polykleitos studied the order and proportions of the different body parts. He managed to put this in a canon describing the proportions to be followed in sculpture. The Canon applied the basic mathematical concepts of Greek geometry, such as ratio, proportion, and symmetry to establish harmonious proportions. Thus creating a system capable of describing the human form through a series of continuous geometric progressions.

This approach helped artists in the far future to understand how to depict the human body. When Polykleitos canon was applied it gave excellent results and the art pieces derived from it were extraordinary.

Leonardo Davinci (1492AD) used this as a base for his Vitruvius man. 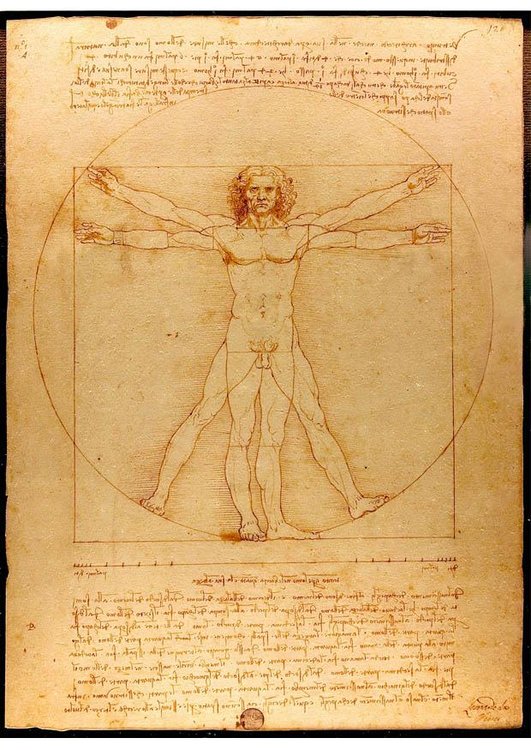 Here is a free download of the body proportions of a human figure. You can download and print it and trace it a few times to understand how a human figure is built. It would surely help you understand the human form better.

Every Greek god had a name and was clearly recognizable through an attribute. An attribute is an object he or she held in her hand or was depicted next to her. It referred to an important aspect of their life or myth, an attribute can also refer to scripture.

Pallas Athena, the goddess of wisdom, was often depicted together with an owl. Cupid, the god of love, with a bow and arrow, etc. Through the attributes, the person on the artwork was recognized and connected to the specific myth that belonged to the respective god.

What do we know about the artist?

We hardly know anything about Greek artists. They did not leave us anything that could help us. The only things we know have come through to us because the Romans talked about it and wrote something down. Any written info, drawings, or paintings by Greeks are lost. Neither the Egyptian nor the Greek artists were using their own names to ‘sign’ their artwork. In those days art was assigned as a purely decorative task so the artists were considered craftsmen. In this respect, their art was not expected to be an expression of ideas, concepts, revelations, feelings, or emotions. Their art was purely made through assigned methods and styles. The method was lined out and this was the only way art could and should be made. This way of expression and making art in a professional way continued until around 1500 AD.

Something to think about

I just love to hear your answers on this.